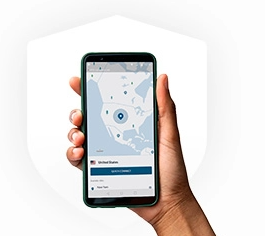 Android is the most popular operating system in the world, but not the most privacy-friendly. The Android OS that you get pre-installed in most smartphones can potentially include software components that feed your data to advertising services. This may seem intimidating unless you use the best VPN for Android to protect your device.

A VPN can spoof your IP as well as encrypt your traffic to solve many privacy issues.

Looking for the best Android VPN can be a real hassle. To help you out, we’ve gone ahead and selected only the best VPN services for your Android smartphone.

On their Android counterpart, NordVPN provides the same quality they deliver on desktop. This easily makes it one of the best Android VPN clients on the market. With great speeds even when on mobile data, this VPN combines a good balance of security and entertainment.

Its strict no-logs policy and great security features will keep you out of harm’s way. Plus, it doesn’t require the latest Android version to run smoothly as it’s very compatible with a wide array of major Android releases. This means that practically all Android users can get NordVPN and use it on their devices.

Furthermore, you can use your subscription on 6 devices at once, and if something isn’t working, you can contact NordVPN’s 24/7 live chat support to solve the issue.

For a deeper investigation of NordVPN, read our NordVPN review.

Save the most on most popular NordVPN subscription

Not only does Surfshark offer one of the cheapest Android VPN’s, but it’s also one of the most advanced in terms of features and security. This provider offers no-logs, no leaks, and the new GPS spoofing feature to keep you hidden at all times. Also, thanks to its Camouflage Mode, you can access restricted content in censorious countries, such as China.

Incredibly easy to set up and use, with this Android VPN, privacy is one click away. Despite a lower server count (1700+ servers in 60+), once you download Surfshark, it provides some of the best speeds on the Android VPN market.  And it also unblocks Netflix, allows torrenting, and has a dependable 24/7 live chat.

Save the most on most popular Surfshark VPN subscription

The VyprVPN Android app provides comparable performance to its desktop counterpart, providing the same advantages that many users love about this service. Compatible with devices running version 4.4 (KitKat) and up, this VPN will suit your needs even if it’s been a while since you’ve upgraded your smartphone.

VyprVPN has excellent encryption, a great kill switch, and split tunneling, which allows you to choose the apps that should use the VPN. Most users will also appreciate dedicated streaming servers for Netflix, BBC iPlayer, and other platforms.

When it comes to speed, VyprVPN has their own fleet of 700+ servers in 60+ countries, thus the speeds are fast across the board. If you want to be safe from all kinds of online threats without overspending – get VyprVPN.

For a deeper investigation of VyprVPN, read our VyprVPN review.

Save the most on most popular VyprVPN subscription

If your smartphone runs at least Android 4.0 (Ice Cream Sandwich) or later, PrivateVPN is definitely a solid option to consider.

With their Android app, PrivateVPN allows you to connect to over 150 servers in 60+ countries, yet the service boasts great speeds. This is due to buying bandwidth directly from the IP transit providers.

This Swedish VPN has great security features: military-grade encryption, a reliable kill switch, and a Stealth Mode. Yet PrivateVPN’s strongest ability is unblocking geo-restricted streaming services – Netflix, HBO, Disney+, and anything else you can think of.

When you buy PrivateVPN, torrenting isn’t out of question as well, as P2P activities are allowed on all servers and the service also offers port forwarding.

For a deeper investigation of PrivateVPN, read our PrivateVPN review.

Save the most on most popular PrivateVPN subscription

If you’re using Android version 4.1 (Jelly Bean) or later, Private Internet Access is a great service that doesn’t disappoint on mobile as well as on tablet. This is probably the only VPN to have its no-logs policy proven in court. It also has no leaks and provides anonymous payment options.

Private Internet Access combines military-grade encryption, secure protocols, and a huge fleet of servers (3300+ across 46+ countries) to offer one of the safest and fastest VPNs for Android.

This provider is also good at unblocking Netflix and torrenting. Install Private Internet Access to benefit from 10 simultaneous connections and small prices.

Save the most on most popular Private Internet Access subscription

How to choose the best Android VPN app

Our conclusions come from personal experience with various Android VPN client options. Hopefully, they’ll be useful to those seeking a VPN app for their Android device.

If you’re trying to make sense of it all and know what’s important when choosing a VPN, here’s what we look for when deciding which VPNs will end up in our 5 best Android VPN list:

How does VPN work on Android?

A VPN for Android phone connects to a VPN server first, hiding your IP address. Only then your request to open one or another website is completed. In the meantime, your traffic is encrypted using a military-grade cipher. This means that nobody can see what you are sending or receiving, including the VPN itself. Of course, that’s true only if the provider is serious about not collecting logs.

If you want to learn more about how a VPN works, check out the following section of our “What is a VPN” article.

Do I need an Android VPN?

We believe that everyone should use an Android VPN. You can hear about new vulnerabilities after each version of this OS, and that’s not likely to change. Besides, there are plenty of shady apps on Google Play Store than can inject malware or data logging. Even some VPNs for Android are considered as dangerous!

Therefore, you need a VPN for Android if you want to:

Which Android devices can be protected using a VPN?

Most Android devices using older Android versions like Jelly Bean, KitKat, etc. should definitely consider getting a VPN software as older OS versions have more security vulnerabilities that could be exploited by hackers.

A VPN won’t solve those vulnerabilities, but you’d be a lot harder to trace, which might just do the trick. Usually, this means going to the Google Play Store (that comes pre-installed in all android devices) and downloading the provider’s VPN app, turning it on, and that’s it – you’re now protected.

Most VPNs won’t drain your Android’s battery. While it used to be the case with older OS versions, now there are few complaints about battery time when the VPN is on. Of course, if you actively use a VPN for streaming or torrenting, the battery will drain much faster.

How do I stop my Android from disconnecting from VPN?

If you have battery optimization turned on, your Android VPN will disconnect whenever your smartphone’s screen goes black. This can be not only annoying but also dangerous because any app that runs in the background will be sending and receiving data without protection.

You can solve this in multiple ways. One is to turn on the “Always-on VPN” setting. Another is to remove your VPN from the list of apps that use battery optimization. Instructions on how to do that depend on the model of your phone.

Here are some examples of the most popular Android devices:

Why is VPN not working on Android?

There can be a number of reasons why the VPN is not working on your Android device. We will try to list the most common issues and how to solve them.

If all of the above didn’t help, we recommend searching for an answer in your VPN’s knowledgebase. If 24/7 live chat is available, it would probably be the best option. Make sure to tell the representative if everything worked with another VPN – this might save time for everyone.

Can mobile Android VPN be used on PC?

While you can’t install Android VPN on a PC, most of them have desktop versions for Windows, macOS, and even Linux. When you buy a VPN for Android, you also can install it on other supported platforms, including browser extensions.

However, you should also have in mind the number of simultaneous connections allowed. Most providers allow up to 10 devices at the same time, but others like Surfshark put no limit at all. To sum up, all of our recommended best VPNs for Android have PC versions.

Is it safe to use a VPN on Android?

Using a VPN on an Android device is safe if you avoid shady and ill-reputed providers. There are plenty of free Android VPNs on Google Play Store that promise no-logs, fast speeds, and Netflix. In truth, most of them will collect and sell your data to third parties, sometimes also adding a dose of ads.

However, if you install a reputable Android VPN that has a strict no-logs policy, you can be sure that it’s safe to use.

Does Android have a built-in VPN?

Android has a built-in VPN, but we cannot recommend it. To start with, this VPN uses outdated L2TP/IPSec, IPSec, and PPTP protocols. Furthermore, it won’t let you change your location and won’t unblock streaming platforms. Finally, you won’t get any extra features, such as GPS spoofing, Stealth VPN, or malicious sites blocker.

Using Android’s built-in VPN is better than nothing because at least you’ll hide your IP and encrypt your traffic. However, if you’re serious about protecting your smartphone, choose from the best VPNs for Android.

How to set up a VPN on Android?

There are three main ways to set up a VPN on your Android device:

If you want to try the native Android VPN, follow these instructions.

Why isn’t free VPN for Android a good option?

As with many things in life, you get what you pay for. In a VPN context, this usually means compromises to security and performance. Paying for quality VPN can drastically improve your experience, provide more services, and maximize your data privacy. This typically also includes customer support that helps to sort any issues that might arise that you’d get only the best experience.

Meddling with free VPNs can be a gamble, and you should keep that in mind when choosing a free provider. However, if you’d rather use a free option, check our free VPN for Android list.

Bottom line: should you get a VPN for Android phone?

Android users should celebrate – they’re much better off on the VPN market than their iOS brethren. Plus, the best Android VPNs also offer numerous features for your desktop devices as well.

Our Top 5 VPN for Android phones in 2020 list is a great place to kickstart your journey towards a safer online presence even on your smartphone if you stick to our security tips and do your research before committing. Always remember that your data privacy is not an expense – it’s an investment.

Want to be the first to get the lastest coupons? Subscribe to our weekly email newsletter. No spam!